“Comparing your work to others is often only good for a kick in the gut. ” C.W.

MAOI:  What animal is your spirit guide?

MAOI: What superhero would be your sidekick?

CW: Which one is the one that gives good back rubs?

MAOI: Do you remember the first public space you showed your art in? How were your nerves, what was the response?

MAOI: Where and When in time would you go?

CW: The future of Brasil.

CW: My friend and I auditioned for the talent show in 4th grade by lip synching “Nightmare on My Street” by DJ Jazzy Jeff and the Fresh Prince. We didn’t get in.

MAOI: Favorite way to find inspiration? What inspires you most?

CW: Traveling, talking with friends over beers, and the internet.

MAOI: What do you admire in a person?

CW: The ability to stop oneself from being an asshole. It’s harder than you think.

MAOI: What 80’s movie would you live in for a day? Who would you be?

CW: Ferris Bueller. God, I was so in love with Sloane.

CW: Eating with your mouth open. I rage.

MAOI: Best advice anyone has ever given you about being an artist, Best advice you could ever bestow?

CW: Comparing your work to others is often only good for a kick in the gut. If you aim to constantly create a piece better than your last in both technique and creativity, then you will always be at your personal best.

**MAOI: Shameless Self Promotion, what do you have coming up? What are you currently working on? ( I asked this many moons ago, and I feel so guilty for being so lame!!)

**CW: I currently have a solo show up at Trifecta Gallery in Las Vegas: (http://bit.ly/15F5c17) and have several group shows at Gallery 1988 coming next month, a two man show at Phonebooth Gallery in June with Michael Ramstead (http://bit.ly/1cG6wlV) and a solo show at Spoke Art in September. I also just painted my first mural as part of http://www.facebook.com/pages/The-Las-Vegas-Backyard-Wall/274183365973221?ref=ts&fref=ts and am working on some collaborative pieces for the next http://prismacollective.com show! Shameless self promotion is right.

CW: Trader Joe’s peanut butter. To hell with jam. And “Shuggie” by Foxygen, for like 3 months straight. 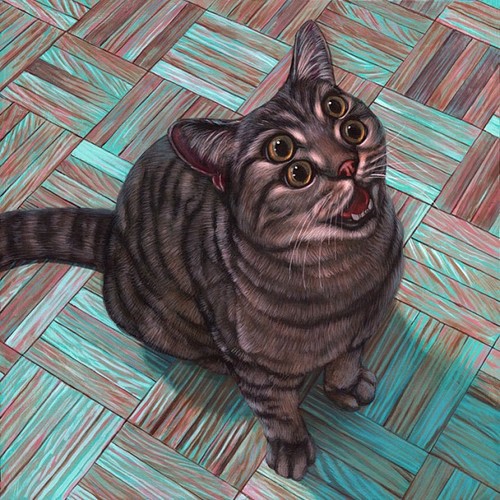 Meow Brow opens at Spoke Art this upcoming Saturday, September 7 and may I say the teaser pieces look more refined than his previous quad-eye kitties. His work possess a nostalgic quality, like his color palate were pulled from faded photographs or pictures that fell victim to a camera with a dim lit lens. His paintings although self reflective and at times somber, don’t possess a dark depressive quality.  But rather more akin to the melancholy of the coming fall and the intrigue of changing leaves, wondering what that change will bring. Interesting that his new show is part commentary on the internet and social media. Since (in my opinion) the internet is still in its infancy in so many ways, as a society we’ve not had enough time or data to see the true impact on the generation growing up with tech from age two; or even the adult side effects of daily computer use. Tired eyes and strained neck muscles, carpal tunnel at twenty? Interesting to see all the changes that will come to be, and Casey new body of work.

**I’ve had this interview since March and its sad how irresponsible I have been about getting it posted. Shamless Self Promotion is very important, but it doesn’t work if it’s never shared. I’m deeply sorry to the artist and included links to the shows he mentioned that are sadly now in the past. September is still up ahead and I can’t wait to see what is shown in the Spoke Art Show. No longer will I be so late to posting, I’m commited to meeting my own personal deadlines.